Get to Know Dr. Tavi Henry

Dr. Henry says that being a dentist is so rewarding because he has the ability to help his patients achieve healthy, beautiful smiles that can change their lives! He has seen it time and time again that having bright and attractive teeth can raise a person’s self-esteem and allow them to further themselves personally and professionally. Before you meet him in person, you can learn a little more about Dr. Henry’s background below.

Why Did You Decide to Become a Dentist? 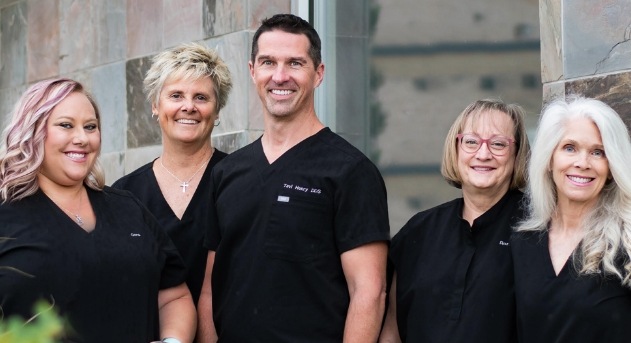 Dr. Henry has always been a hard worker, and he never likes to just sit around and do nothing. So, before becoming a dentist, he owned and ran a business that focused on lawn irrigation. After years of manual labor day in and day out, he realized that he could only go so far in this job, and it was beginning to take its toll. He realized he needed to make a change and do it NOW. Because he loves working with his hands and making people feel good about themselves, dentistry was a natural choice, and he couldn’t be happier with his decision.

Where Did You Study Dentistry?

Dr. Henry earned his DDS degree at the University of Colorado School of Dental Medicine, and even though he graduated years ago, his education has never truly stopped. To date, he has taken over 400 hours of continuing education on subjects such as sleep dentistry, cosmetic restorations, implant dentures, and orthodontics. He is also a certified Invisalign provider. On top of this, he is a member of multiple professional organizations, including the:

Outside of the Dental Office, What Do You Like to Do?

Dr. Henry comes from a large family—he is the eighth of 11 children, so his parents named him Christopher Patrick Octavius Henry, and his siblings and patients simply call him “Tavi.” He is still close to his family and literally lives next door to his parents. They are all musical (Dr. Henry was actually a vocal performance major in college), so everyone likes to get together and play instruments. He enjoys restoring old cars and is currently working on a 1925 Model T Touring car and a 1965 Ford Thunderbird Convertible. You’ll often find him hiking and camping on the weekends as well, and he is also an avid wine enthusiast.